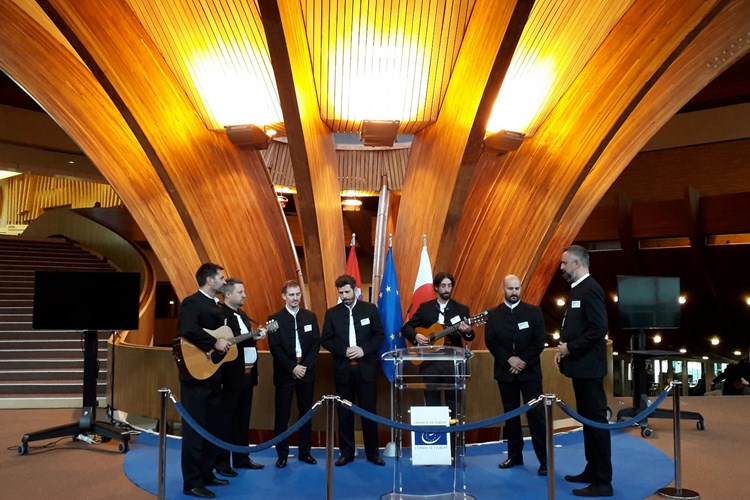 On the occasion of the 25th anniversary of the full membership of the Croatia to the Council of Europe, Minister of Foreign and European affairs H.E.M. Gordan Grlić Radman visited Council of Europe and met with the Secretary General of the Parliamentary Assembly of the Council of Europe Mrs Despina Chatzsivassilou-Tsovili and the President of the European Court of Human Rights Mr Robert Spano, the Judge in respect of Croatia Ms Ksenija Turković and Court Register Ms Marialena Tsirli.

At 1 p.m. minister Grlić Radman and permanent representative of Croatia to the Council of Europe ambassador Toma Galli had welcome speeches on the occasion of the reception jointly organized by Croatia and Japan (celebrating 25th anniversary of its observer’s status) with presence of Japanese permanent representative to the Council of Europe ambassador Takeshi Akamatsu and Deputy Secretary General Bjorn Berge, who also delivered their speeches. During the cultural part of the reception, Japanese and Croatian musicians Klapa Grdelin had presented their respective traditional songs while the videos presenting natural beauty and touristic attractions of both countries have been displayed on two screens. The Japanese and Croatian specialities have been served.

The reception gathered quite a number of high representatives of the Council of Europe, members of diplomatic corps and Croats employed in the Organization.

Interview of Minister for Eurojournalist and Mediapart

Permanent Representation of the Council of Europe organized an interview with minister in German language. The original version is published on website of Franco German journal of Upper Rhin  https://eurojournalist.eu. The French and English version of interview are available also on the website https://mediapart.fr

Address of the Minister at the European Parliamentary Association (APE)

At the end of its visit, Minister Grlić Radman delivered the address for the representatives of diplomatic corps and high officials of the Council of Europe at the premises of the APE. In his speech on the current challenges: pandemic COVID-19, migrations and climate changes stressing out the importance of regular and prompt exchange of information between member states. He welcomed the Council of Europe’s reforms which seek for the pragmatic solutions for better efficiency and strengthening of Organization’s capacities. Minister also highlighted the importance of multilateralism as a form of international cooperation that can assure the strength of every Member State as well as to bring the progress for all. He reminded on Croatian path and active participation in the Council of Europe, its continuous efforts in fighting corruption, protection of national minorities and vulnerable groups, decentralisation of local government and self-government and protection of cultural heritage and cultural routes. Finally, Minister mentioned that Croatia today is state party to 100 Treaties, 12 Partial Agreements and state signatory to 6.