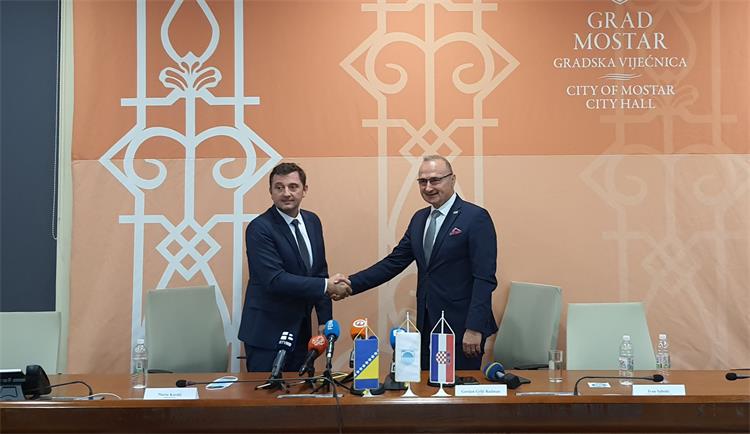 Croatian Minister of Foreign and European Affairs Gordan Grlić Radman and Mostar Mayor Mario Kordić said on Wednesday that the agreement on Mostar, in which there is no outvoting of the peoples, was a model that should be applied at the state level in Bosnia and Herzegovina.

"The electoral law should be changed so that it reflects the example from Mostar in order to allow for a fair representation of the constituent peoples in the collective bodies based on the Dayton peace agreement," Grlić Radman said at a press conference in the southern city.

He said that this "primarily refers to the tripartite Bosnia and Herzegovina Presidency and the House of Peoples", adding that he was thinking primarily of the Croatian people.

In June 2020, Dragan Čović, leader of the Bosnian Croat HDZ BiH party, and Bakir Izetbegović, leader of the Bosniak SDA party, signed an agreement on local elections in Mostar and an agreement amending the electoral law to eliminate discrimination in accordance with the judgements of the European Court of Human Rights and the BiH Constitutional Court in the Ljubić case.

Those agreements made it possible to hold local elections in Mostar after 12 years, and the Bosniaks are not outvoted by the Croats in the City Council.

Present at the signing ceremony were representatives of the US and EU administration, the UK, the Office of the High Representative and the OSCE mission.

Representatives of the EU and the US have been trying for months to mediate in amending the electoral law in at the level of the state, but there is no progress between the Bosniak and the Croat population.

On Wednesday, Grlić Radman said that it was contrary to the Dayton peace agreement that Croats were outvoted at the state level of the state.

"That is contrary to the spirit and letter of the Dayton peace agreement. Necessary amendments to the electoral law should remove all forms of discrimination and inequality and ensure legitimate political representation of the Croatian people in collective bodies," Minister Grlić Radman said.

The political agreement on Mostar has overcome interethnic disputes and ensured the functioning of the city, Mayor Kordić said.

"I think everyone understands that this is the way how BiH should function because this city has been functioning normally for the last nine months," he said.

In the evening, Grlić Radman met with the Bishop of Mostar, Petar Palić, and the head of the Franciscan Province of Herzegovina, Miljenko Šteko, ending his two-day visit to Bosnia and Herzegovina.

Grlić Radman stopped over at Grabovica, near Mostar, to pay tribute to 32 Croat civilians massacred by the Bosnian army in September 1993.